The Kooikerhondje is originally a working dog: assistant to the decoy man, guard of house and garden, and destroyer of mice, moles and rats. It is a kind, happy and lively dog, attentive and intelligent and highly willing to work for his owner. 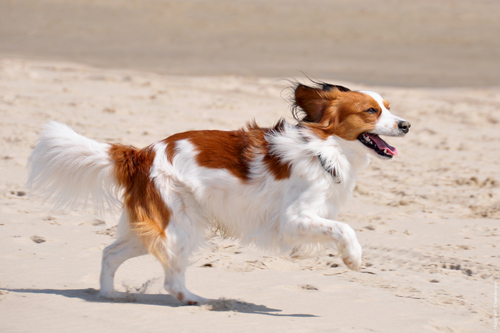 At home, the Kooikerhondje shows great adaptability; calm and modest at times, sometimes playful and full of life. He is very vigilant, but only comes into action when there is a good reason to do so.

When unleashed, he has a high pace of movement, light-footed with a permanently graceful waving tail.
He is quite sensitive to noise and loud words. He does not get along with everybody. In the beginning he can be a bit reserved towards strangers, children and other dogs.

Depending on his temperament, he will flee or growl when feeling insecure. But once he has accepted someone, a friendship has been made for life.

Height at withers: 35 to 40 cm. Medium-long, well-fitting hair. Colour: white with orange-red patches. Almond shaped dark brown eyes with a friendly expression. The long-haired ears are carried against the cheeks; black hair at the end (earrings) is desirable. White feathered tail. Character: cheerful, but not too noisy, very fond of his environment, friendly, kind-hearted and attentive. 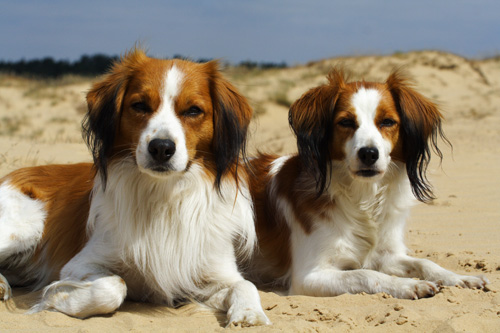 A male dog is often somewhat larger than a female. In terms of character, the two sexes do not differ much. Of course a bitch is in season every once in a while.

Kooikerhondjes shed permanently, a female generally more than a male.

A male is more stable in character, but sometimes has a tendency to question the leadership of his owner. However, with a consistent approach this can easily be avoided.