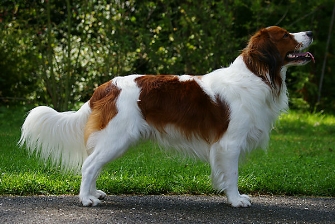 These illustrations do not necessarily show the ideal example of the breed.

In 1942, during the Second World War, the Baroness Van Hardenbroek van Ammerstol began to recreate the Kooikerhondje. She gave a picture of the type of dog she was looking for to a pedlar and asked him to look out for such dogs. At a farm in the province of Friesland he found the bitch now well known as Tommy. She became the founding bitch of the Kooikerhondje. In 1966 the Raad van Beheer adopted the interim breed and in 1971 the breed was officially recognized.
The Kooikerhondje was and still is used in the duck decoys. His task is still to lure the ducks into the decoy with his gaily waving tail; he does not hunt the ducks. He calmly moves between the decoy-screens in order to provoke the ducks curiosity and lure them further down the decoy pipe where the ducks are captured in a trap. They are either killed for the table or ringed for ornithological research.

The Kooikerhondje is a harmoniously built orange-red parti-coloured small sporting dog of almost square body proportions. He moves with his head held high; in action the well-feathered waving tail is carried level with, or above the topline. The ears have black hair at the tip, the so-called earrings. The dog is presented with a natural, untrimmed coat.

The length of the body from the point of the shoulder (at the scapula/humerus) to the point of the buttocks may be slightly longer than the height at the withers. Skull and muzzle are of about equal length.

Lively and agile, self-confident and with sufficient perseverance and stamina, good natured and alert, however not noisy. The breed is faithful, easy-going and friendly.
Outside the hunting season the dog is expected to find and kill vermin, hence he needs to be keen, swift and tough. He is a true sporting dog, being attentive and energetic and having a zest for working and with a cheerful character.

The head is of moderate length, fitting in with the general appearance, clean-cut, with flowing lines.

Set on so as to follow the topline of the body, carried level with the topline or almost straight up (gaily). Well-feathered with a white plume. The last vertebra should reach the hock joint.

Should be flowing and springy, well extended, with good drive. Limbs parallel.

Of medium length, slightly wavy or straight and close lying. Soft hair. Well-developed undercoat.
Front legs should have moderate feathering reaching to the pastern joints. Hind legs should have fairly long feathered breeches; no feathering below the hock joints. The coat on the head, the front part of the legs and the feet should be short. Sufficiently feathered on the underside of the tail. Longer hair on throat and forechest. Earrings (long feathered black hairtips) are highly desirable.

Colouring on the head

A clearly visible blaze running down to the nose. There should be colouring on the cheeks and around the eyes. A blaze that is too narrow or too wide or only partly coloured cheeks is less desirable. A black tail ring where the colour changes from orange-red to white is permitted.

Any departure from the foregoing points should be considered a fault and the seriousness with which the fault should be regarded should be in exact proportion to its degree and the functional health and welfare of the dog and on its ability to perform its traditional work.