The name of the Kooikerhondje is irrefutably connected to the “eendenkooi” or duck decoy. Duck(s) = eend(en), decoy = (de) kooi. The Dutch name “Kooikerhondje” means “dog of the decoy man” or “decoy dog”. Duck decoys are originally a Dutch invention and known in its current form for over 600 years.

A duck decoy consists of a pond with a couple of side-arms connected to it. Most of the times the pond is surrounded by a sort of swamp bush, which creates peace and quiet in the pond and also functions as wind protection. The side-arms can be compared with wide curved ditches, with little trap-boxes at the end of it.
These pipes, nowadays covered with string netting, used to be covered with thorn-bushes to prevent ducks from flying away. On shore, one can also find several screens on one side of the pipe.
The screens, mostly build of reed mats, are arranged in a half herringbone design, making it possible for the decoyman and the Kooikerhondje to move freely without the ducks noticing.

The ducks that live permanently in the duck decoy are called the decoy ducks. These half tame ducks, with the pond, the pipes and the swamp bush as their habitat, had the task of enticing the wild ducks to swim into the pipe.

The decoy man was not able to catch the ducks on his own. Usually he got the assistance from a small dog: the Kooikerhondje. They were described as multicoloured dogs with a colour varying from yellow to orange. Next to that, old engravings show both long haired and short haired dogs. This indicates there was no question yet of a certain breed type. Since the most important thing for the decoy man was the utility of the dog, that was the condition for possible breeding.

The following criteria were important when it came to breeding: 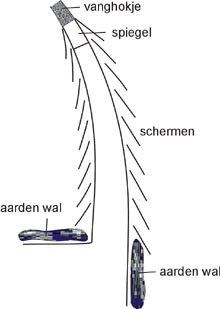 always fly towards the wind.
Once the decoy man has selected a pipe, he throws some food in it. The decoy ducks know this and swim towards the food, which attracts the wild ducks.
Now it’s time for some Kooikerhondje action. With the instructions from its master, the Kooikerhondje walks back and forth behind the screen. Every once in a while the ducks can see his white or half-coloured tail. Out of curiosity, they follow the dog into the pipe.
When the ducks are far enough in, the decoy man shows up, which scares them and makes them fly even further into the pipe. The decoy ducks, knowing the game, swim back to the pond.
The wild ducks are not able to see the pool anymore once they are in the curve, which makes them swim towards the light at the end of the pipe. To ensure that, the vegetation there is kept low. Once the ducks are in the trap box, it is closed by the decoy man.

The tasks of a Kooikerhondje

Walking up and down behind the screen is a very specific task of the Kooikerhondje. A well feathered tail is therefore very important. The ducks get curious because they only see the tail every now and then.

The work in a duck decoy must be done in silence; barking could scare the ducks. That is why the decoy man has taught the dog not only to react on his voice but also on his signs. There has to be a silent co-operation between the dog and its master, even in such a way that the dog can complete his task independently, yet still paying attention to the movements of his master.

Before the 20th century, the Kooikerhondje was not allowed to leave the decoy field, not even at night, so he was used to being alone in the decoy shed.
The Kooikerhondje has another important task besides luring ducks, which is destroying vermin. Especially during the breeding season of the ducks. 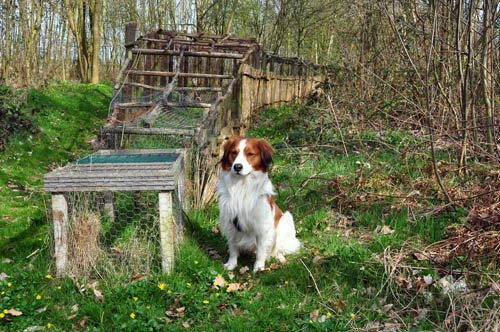 The decoy business does not only concern catching ducks, but also concerns the supervision of the vegetation, the pond etc.
The original decoy business is a unique co-operation between the ducks, the decoy man and the Kooikerhondje. It is a typical example of catching birds with birds, a pure form of bait hunting. It requires quite a lot of dedication, patience and professional knowledge, especially about the behaviour of ducks and the dog. Peace and quiet are very important.

There are still approximately 100 duck decoys in The Netherlands; most of them are involved in scientific research. In some cases the decoyman still gets assistance from a Kooikerhondje.